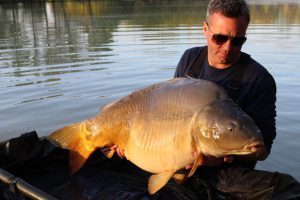 I’m really pleased that the first series of Pursuit is to premiere on Quest TV, this coming bank holiday Sunday. Even though, of course, I’ve seen these episodes many times during the editing process it’s always a good and rewarding feeling to see them broadcast on screen.

The show is going out this Sunday at 9am on Quest which to all of you ‘angling up at dawners’ is like midday, it’s going to be a struggle for me as I will be well and truly glued to the Joshua v Klitschko fight on Saturday night.

Whilst it’s being staged here, I’m guessing that the US will want it to fit their schedules, so I’m expecting a late one. I know AJ has put all comers away early so far but I’m not expecting that in this fight. I can’t wait for it and whilst I really rate Klitschko I want to see Joshua win in style. A stoppage for AJ or could Dr Steelhammer confound us all?

Anyway back to the show. This first episode was shot down at the Broadlands lake complex in Hampshire which is a stunning venue just off the M27. It’s incredible that such a beautiful and tranquil venue can be so close to a major motorway and it’s a real contrast of hectic and busy to slow and easy in a matter of metres.

We chose the venue because it offers up a real variety of fishing over its lakes and a gorgeous piece of river. I knew as soon as I saw the river that John Bailey would want to fish it and would be a struggle to move him into the lakes. Well I was part right because he did get straight onto the river but was lured onto the lakes by his angling guests on this shoot.

Joining John on this trip was James Buckley who was the young star of our second series of Crabtree in 2015. James, along with his dad Rob shared a whole summer adventure with us, filming the 6 episodes of Crabtree. James went from a decent and enthusiastic angler to a very good angler through filming and fishing with John and the team. He is still very enthusiastic! And by all accounts becoming a bit of an angling star in his own right.

The plan was for John and James to reacquaint on camera and to enjoy an angling trip fishing for whatever came along. I think both of them just enjoy fishing and as you will see in this episode, that’s very evident. The river was the perfect place to start because it holds such a variety of species with a different type of fish possible on every cast. It is also visually stunning and a great place to film.

Father and son fishing duo Heath and Ethan and regulars at Broadlands, happened to be on the river when we arrived, so we thought it a good idea to include them in the show. Ethan is as enthusiastic as James and again as is evident in the show, totally loves his fishing.

As a sub note on Ethan, we often meet anglers on these shoots and if they are decent people and love to fish, we welcome them into the fold. Fishing should be inclusive and our whole ethos is to share and enjoy this great sport with friends and family and the people you meet along the way.

John always says that as an angler, one never stops learning, and whilst he is always more than happy to offer up his advice and expertise, he is always open to learning new methods and techniques. I would add that a bit of local knowledge on any water is always worth seeking and listening to.

Back to the fishing and without wanting to give any spoilers, there is a bit of everything in this episode and we felt a gentle introduction into the new series. It’s a bit ‘Crabtree’ with the river and the father son aspects, combined with the unbridled excitement of kids (and the grown up kids) who love their fishing.

The series moves on a pace with a few of the episodes after bigger specimens and we visit France and Ireland, visiting some beautiful lakes and loughs for monsters.

But we retain, I hope, something that appeals to everyone. In John Bailey we have one of the best all round anglers in the world, with such vast experience and John ensures that I and the team cover all types of coarse angling in these shows.

He is also a fabulous presenter. I work with many talented personalities, presenters and actors but I put John right up there. He makes his job look effortless and makes mine very easy.

I really hope you enjoy this week’s show, let us know either way by posting your comments, messaging us or on our site Pursuitfishing.co.uk. John and I will answer your mails and messages personally.

More meandering on the next episode next week.