My life as a young fisherman

Home / News / My life as a young fisherman 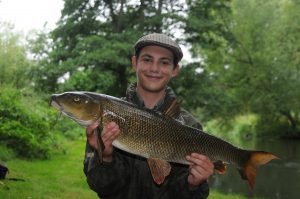 I have been very lucky to have experienced some fantastic fishing locations and right up there at the top of the list is the adventures we had filming Crabtree Goes Fishing and Pursuit with Lester, John and the crew. What could be better than spending a whole summer travelling around in camper vans, at Carricks B&B and living the dream.

This ‘road trip’ trip took me to some amazing places like Etang Menieur in France where I caught a huge 42lb Carp, fishing for Bream where I caught my PB, fly fishing on the Kennet for stunning trout or catching a whopping Crucian Carp. Who can top catching 5 chub over 5lb before breakfast! Filming Crabtree meant I met some world class anglers such as Alan Blair, Alan Stagg, Scott Maslen, Adam Penning and so many more. I have also made new friends like the big boss of the trip Lester Holcombe and of course my angling hero John Bailey. John and I have become firm friends and he’s helped me catch some huge fish, not least a rare 14lb Barbel out the Wensum.

You can imagine how pleased I was to hear form Lester shortly after Crabtree had aired first time on Sky to ask if I could take part in the first episode of  his new TV series called Pursuit. This meant a short run down the motorway to fish at Broadland after Grayling on a tributary of the River Test and carp on their superb series of lakes. This was a great weekend especially as I felt that this filming might take me to new places.

Following Crabtree and the Pursuit I started a website and Facebook profile which have taken off and the numbers of likes and follows etc are slowly increasing. I have also written blogs for The Canal & River Trust and am currently in discussion with several well know anglers about doing articles with them when the new season opens.  John Bailey has been a great mentor and we’ve walked many miles, whiled away many hours and thrown in many pints of maggots since Crabtree and Pursuit. He very kindly includes me in his articles when we’ve had a trip too.

None of this of course would have happened if I hadn’t have been lucky enough to be in Crabtree so a massive thank you to Lester and John.

I hope you enjoy the first episode of the pursuit I sure had a good time filming it!